Sunday the 5th of July was scheduled to be the club outing to Mt Macedon no matter what the weather and the weather was such that only five people braved the cold and slightly damp conditions. Stephen was in shorts (as usual) so it couldn’t have been too cold! The temperature gauge in my car said that it was 3 degrees up at the Memorial Cross, but we also had some welcome patches of sunlight.
First stop of the day was a lake in Macedon and I honestly thought I would be the only one there but Natalie soon rolled up and we went for a stroll around the lake. Fish were jumping out of the water but not in slow motion so neither of us got a shot. We did find an abandoned kids bike in amongst the pines which I found to be an interesting subject. 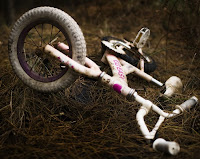 Next port of call was supposed to be the Forest Glade gardens but it was closed so Nat and I went to a waterfall in Mt Macedon where we caught up with Stephen. This was the first time shooting a waterfall for all of us and while it wasn’t the most spectacular fall it was a good learning experience.

The Memorial Cross was the next stop and as is usual for a camera club trip the view was obscured by clouds. There were large patches of sunlight travelling across the landscape teasing us but nothing came of it except for some frosty noses. It was at the Cross that we caught up with Perry and Rachael and the touring party was complete. 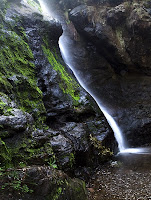 After a hot chocolate in the cafe it was off to Woodend for lunch but along the way we stopped to look at some funky cows (which have a proper name – Belted Galloways) but they were off in the far paddock and the light was pretty dull so we continued on our merry way.
The Victoria Hotel is an extremely popular place for lunch and we hadn’t booked so it was off down the road to Keatings Hotel for lunch. Having warmed up with some good food we ventured out once again and headed off to Hanging Rock. We got there about three and headed on up the hill stopping at several places to take some photos. Naturally the sun hid behind some clouds when we got out of the cars and didn’t come out again until we had descended but we were rewarded with a very nice rainbow at the end of the day.

Driving back back to Mt Macedon we had to pull over to try and take advantage of some of the most intense late afternoon light I’ve ever seen. We had about three minutes before it was gone but it was good to see. We drove back past the paddocks where the funky cows were and they were all up on the fence close enough to touch but by this time it was practically dark so they will have to wait for another time. I doubt I’ll be able to retire on the strength of the images I took on this trip but that was hardly the point. Yet again I thoroughly enjoyed myself due to the people I was with and I’m already looking forward to the next outing.