Sunday morning at 7am, Grants Picnic Ground about 3km beyond Belgrave and an already rapidly filling car park. Pete who lived the closest also was the first to arrive followed by me, Roger, Fred and Albert. The first surprise of the morning was the number of other people who were already there, joggers, walkers and even the odd tourist and of course, 5 intrepid photographers. A bit of a poor turnout but not surprising given the hot days we’d had previously and the early start on a Sunday morning. 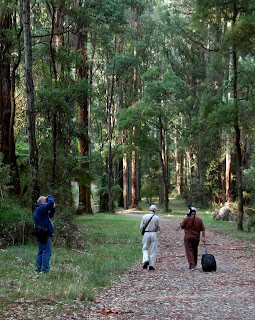 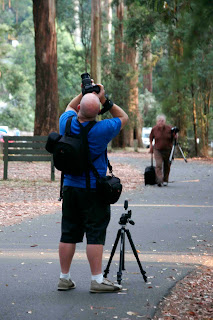 After exchanging some banter we headed off in the direction of the Paddy Track hoping to get some nice sun rays shining through the mist in the trees but alas, even though there were some low clouds around, none seemed to be willing to create the rays that we were after. The sun did provide us with some lovely shots through the trees though and some brightly clothed joggers gave us some colour in the forest. Unfortunately not even the plants wanted to be photographed on this day as all thoughts of a bit of macro work disappeared when we could find hardly any subjects.

However, later on some very bold Yellow Robins provided us with some excellent close up shots, it was almost like they were being paid to model for us. This was surprising given the amount of people that were walking along the track, in groups and quite noisily in some cases. It was at this point that we said goodbye to Roger as he had to leave or suffer a fate worse than death at the hands of his wife if he didn’t get to the breakfast on the terrace they’d booked at Wheelers Hill.

After strolling for what was about a kilometre, we approached the top of the hill where the path descends down towards Belgrave and turned around. More Yellow Robins, colourful joggers and other objects presented themselves as we strolled back towards the car park where the cafe and a nice breakfast awaited. The cafe was full of Japanese tourists so we had to sit outside. However, this was an absolute blessing in disguise as three Kookaburras’ were patiently sitting waiting on the balcony to be fed. Albert went into action and took a good few photographs, unfortunately at least one of us had followed the Presidents advice and left there camera in the car. I retrieved my camera and thank goodness the Kooks were still there waiting. It was at that point having noticed the interest in the corner, that half of the cafe exited onto the balcony trying to get shots of the three birds who sat motionless waiting for their breakfast. The poor people sitting in the corner had to move tables or be mobbed by the crowds. It was almost impossible to even see the birds as the tourists adopted all sorts of poses in front of them.

Breakfast eaten, coffee & tea drunk, tourists gone and it was nearing 11:30. Pete had to go and so did I so we bid our farewells to each other on what had been a very pleasant morning with some promising photographs waiting to be loaded onto the computer. Hopefully the next Sunday will have a better turnout and we’ll all enjoy ourselves just as much at Abbotsford Convent on the 1st March, see you there.