Tuesday night and the WCC annual summer BBQ was held in Jells Park at the Stringybark Picnic Area. I arrived at around 6:40 to find that the BBQ covered area was already awash with photographers who had two Kookaburras posing for them on the rafters of the shed. Some people had already been down to the lake and taken shots, others were busy cooking and there were few wandering around trying shots here and there but the turnout was fantastic.

I decided that hunger was more important than the urge to take pictures so I headed for the BBQ. Albert, Anne & Leo, Alan, Tuck and one or two others were gathered around the BBQ cooking, we passed around some stories and discussed how to keep the BBQ’s going and managed to eventually cook some food although Anne’s chicken kebabs still looked pretty raw even after 20 minutes of cooking. Albert had obviously done this before and had his cooked, he took his food to the nearby table after spotting some Kooks sitting in a nearby tree posing nicely for a shot.

Unknown to Albert, this was a tactic employed by these clever birds to lure an unsuspecting BBQ photographer into a well planned and well practiced trap. Unfortunately for Albert he fell for it, hook line and sinker and whilst he was distracted taking shots of an unusually well posed bird, its accomplice swooped and was last seen heading in the opposite direction with one of his sausages. He did give a short chase but soon realised that he had been fooled and settled for what was left on his plate.

After eating it was time for a bit of low sunset photography and a short walk around the lake. The walk didn’t really have anything inspiring but on the way back the horizon had taken on a fantastic shade of blue and some silhouette shots were taken and were very successful. It was at this point when two Tawny Frog Mouths appeared and just sat so close to us on a post and in the tree that we were stunned. They were that close that I actually could not get my 100-400 lens to focus on them and had to move backwards. Unfortunately the light was so low now that flash was required to get anywhere but the birds did stay around for us to get plenty of shots. 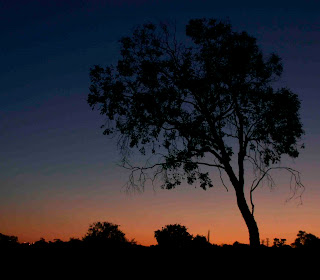 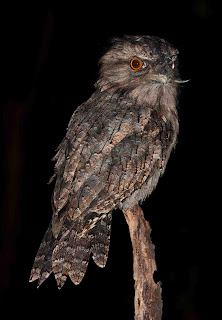 I thoroughly enjoyed the night and I hope that everyone else did too although I did get bitten by the mozzie’s. The feedback about the blog was good and it seemed to be going down well but only time will tell. There has been one point that arose which was that not all people have access to the internet however, I have been reliably informed that there are only two members listed without email addresses and one of those has a partner who has got an email address and the other is believed to have access to the internet. Even so, with the internet so easily accessible these days it is easy to access the Blog from many places.

Thanks again to all who attended and please check out the calendar for the next event.