On Sunday 1st March 2009, the club held its Sunday outing to the Convent at Abbotsford. As usual for these club trips it can be 36 deg on the Saturday and on the following Monday but the Sunday started as dull overcast and cold. Rain was drizzling from the sky and when I arrived at 07:40, I was late partly because I forgot to even look where the place was and part due to the Monash Freeway being closed at Burke Street and the sun was definitely nowhere to be seen. There were three of us there; Pete had arrived early because he was due in Ballarat for the VAPS meeting and APSCON opening ceremony. We ventured into the convent and found the cafe was open and it was a struggle for me to pass the door without venturing in out of the cold. The buildings we found were in poor state of repair and it seemed to get worse as we made our way around the back. There were shots to be had everywhere but with the light so flat we were having problems getting anything decent. It soon shot around to 08:15 and Pete said he had to go so the remaining two of us found the cafe and some breakfast. One or two others started to drift in but as seems to be the case lately, not significant numbers. I ate my breakfast and then ventured off to find some different buildings and found a very nice courtyard and a open corridor to photograph. 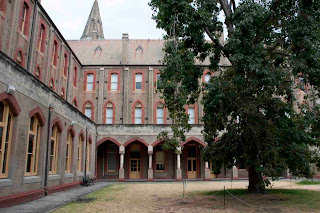 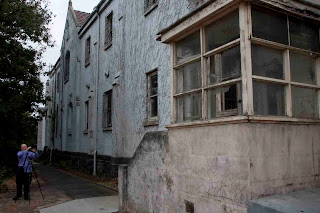 I took quite a few photographs around the buildings and there were hundreds of doors, a comment I heard again from Don who also had found hundreds of doors. But my stomach soon got the better of me again where I met up with some other club members who were also looking for a coffee. We were joined by yet another couple and eventually another couple so much talking and chatting went on. Several coffees later I decide that enough was enough and headed off to find another location to take photographs.

Thanks to the members that supported the trip and I hope you enjoyed the day at Abbotsford Convent. I’m looking forward to the next trip to Puffing Billy on the 29th March 2009.