Here’s a quick write up regarding last nights (Tue 21st July 2009) workshop, which was another huge success.

Originally, this night’s theme’s were to be The Geotagging of Photo’s & The 4-Club Selection Night. Therefore when the President’s email arrived adorned with capital letters and RED text, I wondered in my own mind how successful the suggested alternative of table top photography was going to be. I knew exactly why the red text was there but being at work and leaving late meant that I wasn’t able to bring anything along for a table top display as I had to go straight to the club.

I was really concerned when I arrived, I wondered if we had enough to fill the evening but how wrong can someone be. I don’t mind admitting that I was totally wrong and when people started arriving with armfuls of backcloths and display items the room almost turned into a craft market. We had antique drawing sets, wooden snakes, flowers, russian dolls and even an old SU carburettor from an engine. 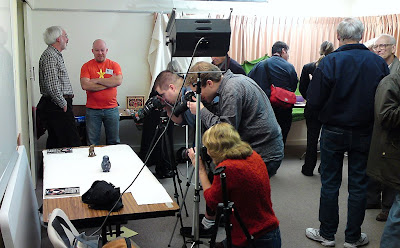 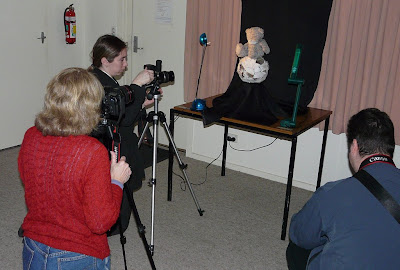 In all we ended up with four or five displays, John kindly brought his stands and backdrop paper and there were lights everywhere. I saw several members going around offering advice to beginners and there was equipment being shared everywhere. I loaned my 16-35 L Series lens and tripod to Rodelle who I hope got some great pictures for her collection. Peter had loaned a lens to Dijana who was also getting instruction on the techniques of table top photography from Peter.

There were three guests turned up and they got stuck into taking pictures and hopefully they enjoyed their evening and we’ll see them again in the near future. 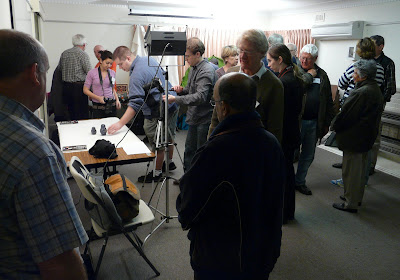 2 hours had passed and it was time to pack up and get into the geo-tagging lecture which had been kidly arranged by Craig and Peter. I’ve often seen Pete’s GPS hanging from his jacket and wondered how he managed to get the information into Light Room to geotag his images. Craig instructed us on the his equipment, giving us the necessary technical information required to answer any questions we may have had before moving on to how the software matches up the GPS track to the pictures. I must add that the Google Earth tracks that Craig showed us were pretty impressive and gave a lot of us a bit of a thirst to have a go at geotagging.

Overall the night was a huge success again and on behalf of the committee and members, I would like to thank everyone who put time and effort into making this a successful night.

Unfortunately due to the amount of questions asked about geotagging, we weren’t able to carry out the resizing and saving images demo as planned. We have therefore supplied several written pages on this which can be found on the Tech Help Blog. There is a link in the ‘Links’ section in the right hand column of this BLOG.