It has become apparent that there is a serious identity problem occuring within the club and hopefully I will be able to address the issues and resolve them with this BLOG article.

Over the previous few months it has become apparent to the parties concerned that there is a major identity problem that has arisen within the club and the persons concerned have decided that enough is enough and it is time that this was sorted out once and for all.

It wasn’t really a problem at first and being handed a disk with images on it on a Tuesday night didn’t really bother me. However this little problem seems to have escalated over the last few months seemingly in line with the clubs expansion.

What happened next was that I found that I was increasingly being cornerned on a Tuesday night and was being asked about competition images by several different people. I found this odd really as I had nothing to do with competition images apart from enetering my own. The first clue I got was when someone called me Peter, it hit me then. Being a fellow countryman of Peter Myers, even though he was born on the wrong side of the border, it occured to me that we sounded pretty similar when we talked. This was obviously causing confusion amongst people and they were mixing the two of us up.

The next time I was handed a disk or asked a question I said to the person “do you think I am the Competition Steward, Peter”? The look of confusion on the face of Alan (oops) was enough to confirm that in fact he did think this and after a chuckle and correcting him in the error of his ways all was good.

The reason I decided to write this article was because after having quite an amusing email conversation with Peter this morning about the images in the previous article, it transpired that Peter was called Dave several times during the night and I was interestingly called Andy???? (I don’t know either). The person (who shall remain nameless) who took pictures of the room that I was after for the BLOG and also called me Andy last night, was asked by me if he would send the images to me for the BLOG report. He actually sent them to Peter, so for George’s sake (oops) and all you others out there (you know who you are) who need guiding on who is Peter and who is David, see the picture below. 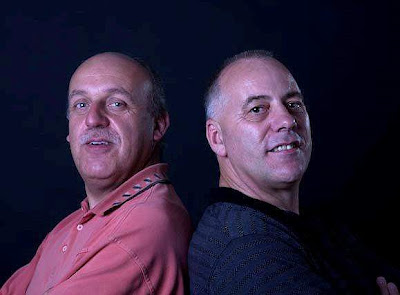 I am David, I’m in the left hand side of this image and I am the BLOG and Newsletter Editor.

I am Peter, I’m in the right hand side of the picture and I am the EDI Competition Steward.

Of course I have written this in jest and neither of us really mind if you get us mixed up, we know that some of you struggle with the spoken English language especially the Aussie’s amongst you so we are happy to assist with the intricacy of the Yorkshire and Lancastrian dialects. If you don’t know where Ilkley Moor is or the term ‘aye up!’ confuses or you have no idea what the significance of a whippet and flat cap is, you can either speak to us on a Tuesday night or obtain the Hale & Pace DVD collection from your local store and watch the episode marked ‘Yorkshire Airlines’ or ‘Northern Calypso’ to assist you in clarifying these absolutely normal English terms.