Skip to content
Last Sunday’s Arcades & Laneways outing was another club success thanks again to the fantastic organisation abilities of our President, Pete Davies. We’re lucky to have such a keen and conscientious President and I was pleased to see that the members supported his efforts this weekend with a fantastic 21 members turning out.

With the meeting time set for 8am at Federation Square I did have my reservations when I boarded the first train of the day from Glen Waverley to the city. I was off to a bad start because this first train wouldn’t get me to the station until 8.06am that meant I was already going to be late. A quick text to Pete fixed this but sitting on my own waiting for the train to set off had me wondering whether it would just be Pete and I with just a couple of others at Fed Square as it had been on occaisions in the past with these early Sunday morning starts. My fears were soon put to rest with the arrival of Roger and the Fred on the train. We chatted BLOG, Gallery and club most of the way as well as Roger and I trying to outdo each other with our new camera purchases, Roger has bought the new Pentax K7 and I have just bought a Canon 5D Mk2.

As the train picked up at East Malvern we noticed Steven getting onto another carriage and when we arrived at Flinders Street we noticed Leif getting of the train too. When we got over to Fed Square we noticed Pete, Perry, Rachel, Natalie, Sue & Albert all waiting for us. Whilst we just waited another 5 minutes I rushed into the Seven, Eleven store to buy some breakfast which consisted of a sausage roll and a coffee. This provided us with the first humour of the day because to say that the coffee was awful would be an understatement, it was disgusting and the sausage roll was like cat food (whatever that tastes like). Anyway two sips of coffee and into the bin we headed off accross Flinders street into the well grafitti’d lane that is Hosier Lane.

After much photographing and deliberation of whether graffitti is art, we met Andy & Rosie Armitage and continued on to ACDC Lane. This lane seems to have some seedy establishments along its length and a look through one broken window confirmed this. Back onto Flinders Lane and we headed along and up Exhibition Square where we found that we we’re well ahead of schedule so it was into the coffee shop and some breakfast (I didn’t throw that one away).

Restarting our trip we picked up Ross Vaughan and John Hadfield and continued along and stopping at Benson Lane where I thought Roger had laid himself down for a rest. In fact as the picture here shows he was actually using a well practised photography technique called laying down and looking up. You must agree though that he does look very relaxed. 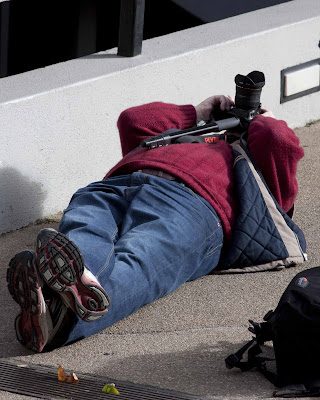 We continued on picking up Don & Kathy Boyle as well as the early bird himself Pete Myers with his poor wife Jill who obviously would have preferred to be there at 8am with the rest of us. We wound our way through several alleys towards Chinatown eventually entering into Coramandel Place, home of a famous golf course architects, Thomson Wolveridge & Perrett. This got Peter Davies really excited as he is a golf course nut (shame he can’t play as keenly). 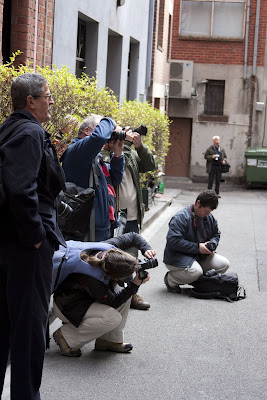 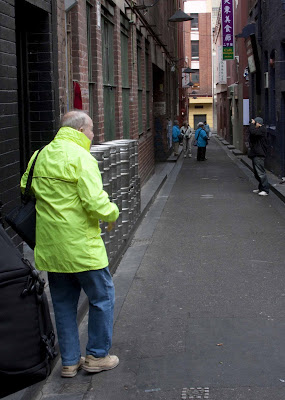 Don at Dean Alley
We wound our way down towards the old post office on Elizabeth St and Pete announced that we would take some shots here and then go to Melbourne Central for lunch. All of this time Jill Myers had been in touch with Sophie Zhao’s daughter by mobile phone. As you will probably all have guessed, Sophie doesn’t speak much English and was relaying messages to Jill via her daughter whilst she was attempting to meet up with us. Unfortunately after many attempts to try to arrange a meeting place and Jill going to where we thought Sophie was, Jill still couldn’t find her and we unfortunately couldn’t catch up with her. I think a volunteer to take Sophie to the next meeting would go a long way to helping her integration to the club. Language isn’t a barrier in the photography world and neither should it be in our club so any volunteers would be appreciated.

Lunch was had and we met up again to proceed through the Royal Arcade and onto Block Place and the Block Arcade eventually reaching Degraves Street and eventually back to Fed Square for coffee and cake or in the case of a couple of people, beer. 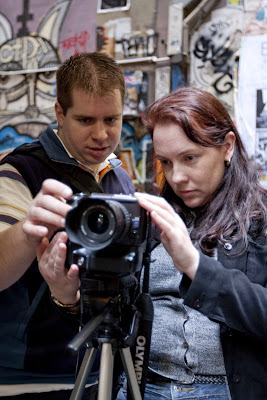 Stephen and Natalie trying to discover how Natalie’s Olympus camera works in manual mode. They failed as her camera has a mind of its own. Natalie, there is a good Canon for sale in an article below 😉

To summarise, we had a great day which was well attended by 21 members and in the case of at least one person, more than 750 images were snapped off. The only unfortunate event for the day was that Perry slipped over in Degraves Street and although he tried to break his fall, his lens hit the floor first. Given that he has a Canon 5D mk2 and an L Series lens in his hand it sounded and probably was an expensive fall. His UV filter had dented and smashed and he couldn’t undo it. He seemed to think that the only damage was the filter and we all hope that this is the case.

It is really rewarding for all of us on the committee when people join in and make the day a huge success and we all hope that the next trip to the Ballarat Photo Bi-ennial and the Point Nepean Sunset in October are just as huge as this trip was.

Thanks to everyone who was involved and especially to Pete for putting it together and making a great day out for all.